Matthew Chadwick is a member of the science team from British Antarctic Survey (BAS) currently aboard the RRS Discovery. Read on to gain an insight into what the team have been up to at their first sampling site, Pirie Bank in the South Scotia Sea.

On our journey to Pirie Bank from Punta Arenas, the team had time to settle in and set up the lab equipment, whilst we were treated to fly by visits from numerous Wandering and Black-Browed Albatrosses. Once at Pirie Bank we began by surveying the sea floor and selected suitable sites for the dredge work. The surveying consists of sending pulses of sound, known as ‘pings’, down to the seabed. The time taken for the pulse to reflect off the sea floor and return to the transducer allows us to calculate the water depth and from this we can build up a 3D map of the ocean floor.

Once suitable sites were selected, the dredge (a chainmail bag) was lowered over 2000 m down to the seabed and then dragged up the steep slopes of the submarine bank, collecting rock samples as it goes. The two dredges we carried out at Pirie Bank were a success, collecting large amounts of mostly igneous and metamorphic rocks. This is important as it begins to provide us with crucial information on the origin of the bank.

With all the rocks categorised and safely stowed in boxes we headed towards the South Orkney Islands, as, by this point, the wind and waves had picked up, making it too hazardous for us to continue dredging.

In the more sheltered waters south of the South Orkney Islands, we enjoyed nearly 6 days of beautifully calm seas. We certainly made the most of the good weather, collecting 29 sediment cores over the duration. We collected a mix of box cores and gravity cores, which after analysis will allow us to answer questions about how and when ice retreated on the South Orkney Plateau after the Last Glacial Maximum some 20,000 years ago. They will also be used to investigating recent changes in the local ocean currents.

The box corer is a 60 cm cube which is lowered onto the seabed. When it touches the seabed a shutter is activated which slices through the sediment, closing the base of the box and preserving the mud layers. This is ideal for studying the recent changes in the region, as the sediments recovered in the box corer will have likely been deposited over the last century. The gravity corer is used for studying environmental changes over longer time scales. It works by dropping a 6-m long tube (like a drainpipe) into the sediment, hopefully recovering material deposited during and following the Last Glacial Maximum.

Most of our cores were collected from two large troughs – seafloor valleys – which extend from the South Orkney Islands. These troughs were carved out during the Earth’s cooler glacial periods, when ice sheet expansion caused glaciers to grow out across the plateau. As we travelled between core sites we surveyed the seafloor to produce detailed maps of previously unsurveyed areas, all the while being careful to avoid the numerous icebergs in the region. We also managed to catch brief glimpses of the islands themselves whenever the clouds lifted and, on the calmer days, you could see the blows of Fin whales in the distance.

On Tuesday we departed the South Orkney Islands, on our way to survey and dredge a further two submarine banks (Bruce and Discovery). On the journey north we passed through Washington Strait, a channel between Powell and Laurie islands, and got stunning views of the glaciers and mountains on either side. Just in case the landscape wasn’t captivating enough, we were also treated to a wildlife bonanza, with hosts of Fin whales swimming alongside the ship, and rafts of Chinstrap and Gentoo penguins torpedoing through the water or watching from atop nearby icebergs. Combined with the cold temperatures it was everything that I had expected from Antarctica and provides a beautiful backdrop to all the varied science we’ve been conducting on this cruise.

Hopefully the good weather will remain with us to Bruce and Discovery banks! During the second half of our cruise, I hope that we’ll be able to collect some more successful dredges and fill in further gaps on the existing seafloor maps. 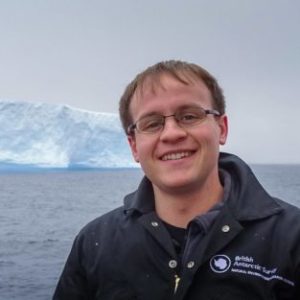