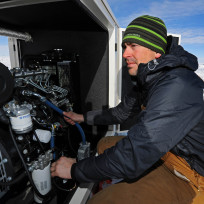 I began my career at BAS in 2006 with an 18 month wintering position at Rothera Research Station. Upon my return I was lucky enough to secure a position as Islands Facilities Engineer and spent the next 2 years travelling to Bird Island and King Edward Point located on South Georgia and Signy Island one of the South Orkney Islands.

From 2011 to 2013 I joined the Antarctic Marine Engineering Group (AME) and spent 2 years working as a Mechanical Engineer on a deep field drilling project called ‘Lake Ellsworth’ where we designed and built a hot water drill capable of drilling through 3.4km of ice to reach a subglacial lake.

In late 2013 I started my current role as Marine Engineer.  Within this role I am responsible for the maintenance and upkeep of many systems on the RRS James Clark Ross and RRS Ernest Shackleton. Each year both ships require a minimum of a 3 week refit period to carry out maintenance and survey work required by the Marine & Coastguard Agency who are the UK flag administration and Lloyds Register / DNV who are the respective Classification societies for the BAS ships in order to comply with all legislation required to operate the ice strengthened research ships.