RRS Sir David Attenborough has air and aerosol sampling facilities that draw air from two locations – the foremast meteorological platform, above the vessel’s bow, and from above the crow’s nest. These locations ensure clean, ambient air samples that are uncontaminated by ship emissions.

The forward meteorological platform is where most meteorological instruments are located – because it is forward of the bow, there is minimum disturbance to the atmosphere from the ship’s emissions and structure (which can alter wind speed and direction). The Atmospheric Lab is located as close as possible to the platform, minimising the distance any samples travel before analysis. The forward meteorological platform is also home to the one permanent air line for continuous monitoring of air samples.

The Aerosol Lab will process samples collected directly, using instruments, or via pipes that can be attached to the railings on the Crow’s Nest. Although aerosol samples can be taken from the forward meteorological platform, it is hard to access in bad weather and there is limited space. On Deck 10, where the Aerosol Lab is located, there is more space for instruments, such as Lidars, for collecting samples.

The polar oceanic regions are remote and inhospitable resulting in sparse data coverage, particularly in the Southern Ocean. This lack of data makes it difficult to address some of the key atmospheric science questions. RRS Sir David Attenborough enables scientists to access this remote region and tackle some of these globally relevant challenges.

For example, we don’t yet adequately understand the main sources of small particles in the atmosphere, known as aerosols. The sources of these aerosols are likely to be different in different regions (e.g. the open ocean, sea ice zone, biologically-active coastal waters) and at different times of the year. It’s important to understand where aerosols come from because these small particles influence how clouds form, and the cloud’s characteristics. For example, whether a cloud has a large number of small droplets or a small number of large droplets affects the way the cloud interacts with solar radiation, affecting the surface energy budget and near-surface atmospheric temperatures.

Long-term measurements of greenhouse gases are essential for assessing their influence on global temperatures and understanding how the atmosphere is evolving. For example, the Southern Ocean is a key sink for carbon dioxide – it is estimated that it has absorbed up to 50% of the human-related emissions that have entered the oceans. However, there is evidence that the Southern Ocean’s ability to remove carbon dioxide from the atmosphere is reducing. On-going measurements are therefore needed to capture this change and to understand the implications for future climate-projections which influence international climate policy.

Changes in the atmosphere’s composition are driven also by growth in urban centres, changes in agricultural practice, and burning of biomass. Signals of these activities can be detected as continental air masses flow out over the oceans. In the Arctic, changes in shipping – enabled by retreat of sea ice – is likely to influence the composition of the regional atmosphere. The instruments on board RRS Sir David Attenborough will provide fundamental observations to underpin studies of changing air quality due to anthropogenic changes. 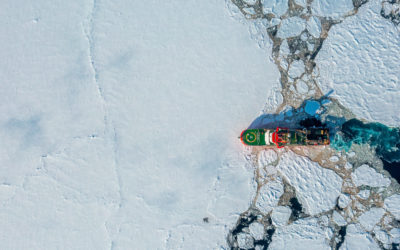