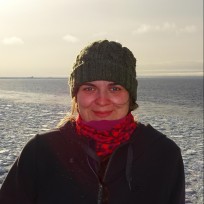 I am a physical oceanographer in the Polar Oceans team at BAS. My current work involves using the output of a variety of ocean models to investigate the drivers of the 2015 North Atlantic cold anomaly, as part of the ACSIS project.

Prior to this, I also completed my PhD at BAS and with the University of Southampton. My research focused on the variability of water masses in the Southern Ocean, and in particular how changes in Antarctic sea ice influence the temperature and salinity of the waters that ultimately form Subantarctic Mode Water.

I previously completed a Masters of Ocean Sciences at the University of Liverpool, where my research project involved investigating variability in the Ross Sea carbon sink. I also worked at the National Oceanography Centre in Liverpool for a year, analysing the levels of suspended particulate matter in Liverpool Bay.